1.) Connor can now open doors in the house. I learned this when one day I found him half-way down the garage stairs after being in the restroom for like 2 seconds! As with everything having to do with motherhood (and pregnancy, in fact), just when you think you get to an easy stage, they find new ways to screw with you!

2.) I am now 26 years old. There is really nothing special about this age at all. In fact, I think it's the first completely meaningless birthday I've had since turning 16. Nothing comes with being 26. Nothing accept being a step closer to 30 ... then 40 ... grrr. I know I'll never regret marrying someone 9 years older than me ... I make him feel younger and he makes me feel younger ... fun how that works out, huh?! Sorry Jamie! :) 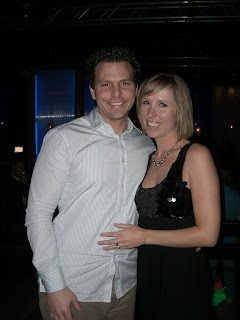 3.) There are no white people on Sesame Street anymore. Seriously. Have you watched it lately? You would think it was international programing with all the different languages and skin colors!! I'm all for diversity and instilling it in our children (because God knows we don't get a lot of it around here!!) but I think PBS has gone a little overboard with the political correctness!

4.) Connor can now say "No". In fact, he does things he knows he's not supposed to do just so he can say "No". Also, when he trys to say "horse" it sounds like "ass". Hilarious! Other new words: airplane, bread, trash, and dunk.

5.) Sucking at basketball and almost losing in an NIT game is just as frustrating as sucking in the regular and post-seasons. As a Kentucky basketball fan, I seriously never thought I would HAVE to watch an NIT game... much less be cheering for my own team in one! However, as a non-fair-weather-fan, I donned my UK duds to the gym this morning and canceled walking in the neighborhood with a friend so I could watch tonight's game. It got my heart racing just like when UK is in the NCAA tourney... who knew?

6.) When you stay up past 11 pm every night, you start to memorize the "acne treatment" and "phone personals" (aka - phone sex I guess!?) ads. It's depressing. They know exactly how to rope-in lonely people who are watching TV late at night by themselves! These ads are second in patheticness only to the ambulance chaser ads that air during the daytime TV shows literally every 5 seconds!

7.) I saw a truck yesterday with a "Hillary Clinton" AND a "McCain/ Palin" bumper sticker on the back of it and I just wanted to puke! Not only because Obama is our prez, so the jig is up, take the crap off your car already! They both lost!! Also, because that just screams racism to me. In my opinion, keeping those stickers on your car simultaneously, no matter what point we are at in the election process, just screams: "Anyone but the black guy!". Sad.

8.) Nicole Ricci AND Elizabeth Hasselback are prego again... am I seriously the last person to know everything?

So, I leave you with that wisdom as I get off the computer to go pack in preparation for our sans-baby trip to Jamaica!!
Posted by Lindsey Brodsky at 10:48 PM