10.  Logan is now 6 months.  That's a big deal considering my goal for nursing (at least 50/50) was 6 months.  Did that happen?   Not quite.  Today marks about 6 weeks since I nursed for the last time.  What happened?  I can't point to one single thing, it was a mixture of low supply, selfishness, and laziness.  Now, don't get me wrong, I'm not throwing a pitty-party for myself, or even beating myself up about not continuing.  I'm really proud of the 4+ months I put into it and I really believe transitioning to formula was the best choice for our family.  Easier? Yes!  More expensive?  Yes!  I feel less guilty about stopping with Logan than I did with Connor because Logan doesn't have the tummy problems that Connor did... although we started Logan on the Enfamil Gentlease right away instead of farting around (literally) with the regular stuff - just to be safe!  BUT - it was much harder for me to pull the final plug on nursing Logan because he is our last baby.  I kept saying, "This is the last morning I'm nursing", "Today is the last day"...... and then I'd wake up the next morning and nurse him again .... and then give a bottle... it was silly really.  Anyway, moral of this rambling is ... I made it through a vacation, the holidays, and many social events without stopping - and I did make it 4 months, so I have decided to let myself be proud of that fact and move on...

9.  Connor is a little man now.  Seriously.  He says words (in both English and Spanish) that shock us daily.  His reasoning and metal awareness is just amazing!  He is definitely in the "What's that", "Why", and "How come" stage.... which is exhausting... but I am so thankful to have a thriving, wonderful, smart toddler.

8.  Connor is also a liar.... sometimes! ;)  Being so smart has also allowed him to figure out how to manipulate and toy with us parents.  I asked him, "Connor, did you take a nap at school today?"  And Connor, knowing that I will make him nap at home if he didn't nap at school says, "Yes I did take a nap.  Twice, five times." (exact verbage)  So I say, "If I call Ms. Roseanne, will she say that you took a nap?"  And he says, "Yes she will."  I proceed to take out his daily report and it says he didn't nap that day.  Busted.... but so cute! ;)

7.  Logan may out-weigh and tower over Connor by the end of this year.  It IS a possibility!  Connor is now in the 20th percentile and Logan in the 70-90th range.  It's crazy.  The great thing about this is I may be able to eventually move clothes from one closet to the other without having to store a couple of size ranges in between.... they say big babies don't always end up 'big' in the end - but Logan is on track to being a pretty big boy!

6.  Connor has played both 3-year-old soccer and basketball in the past few months through our local YMCA.  What a ..... treat?!  Nightmare?!  I don't know.  We spend more time getting dressed (shin guards, tee-shirt, tennis shoes, etc....) for the game than playing in it - but Connor REALLY enjoys himself and it's a new role for me to be a proud side-line mommy.  It's a great learning experience for both parents and the kids.   I'm not sure we have a professional athlete on our hands, but Connor feels like the star in every game, which is really all that matters!

5.  We JUST moved Logan from his Rock and Play Sleeper to his actual crib.  He's been in his own room now for about 3 months, but still in this little sleeper thingy (which, BTW, is the best thing ever!)  Connor slept in his carseat in his crib until he was 9 months, so I really wasn't stressing about Logan still being in his sleeper - but the transition was pretty easy.  One more thing to check off my to-do list. (which is only like a mile long)

4.  At six months post-baby, I can finally say that I feel like most of my clothes finally are back to fitting (at least close to the way I actually want them to) and I'm back to more of a maintenance gym routine.  Though a specific and limited calorie menu and 4-6 days a week in the gym weren't exactly FUN, I am proud of what I accomplished (especially through Thanksgiving, Christmas, New Years, etc...) and I'm a much happier person now that I am more content with my new post-baby-#2 bod!  Not everything goes back into place, but there is a comfort and confidence that comes with knowing you did everything possible to at least TRY an get it back there!

3.  I am still loving my Swagger Wagon.  I was a always a nay-sayer in regards to mini-vans, but after 6 months as a mother of two, I can honestly say, without a doubt, that my van is pretty much the only thing that makes my life easier on a daily basis. Plus, in the world I roll in, I do drive just about the coolest car there is.  It's no Porsche or Jaguar, but honestly, I'd rather have automatic sliding doors than a rag-top any day of the week... at least for the next few years! ;)

2.  I have not gotten a pedicure or painted my fingernails in over 6 months. Not cool.  Just sayin...

1.  What did we do with all out time before we had two?  I used to think that same thing when we first had Connor.... and now I think, if we just had Connor, our life would be cake!  But I wouldn't change anything about our life now.  I feel like we finally have our complete little family!

So I leave you with a few recent pics... 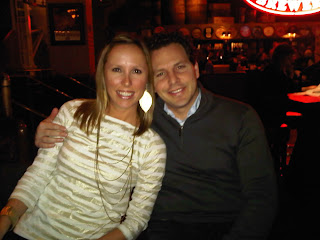 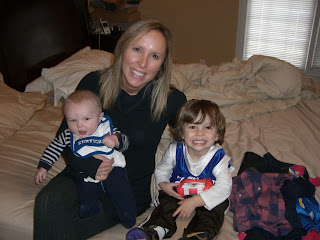 My boys in their UK gear! 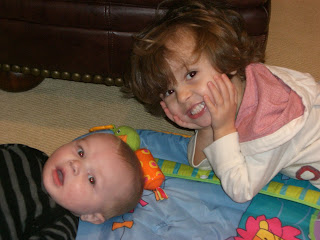 Girl - most women would kill for your bod - babies or no babies! You look awesome and Conner & Logan are so handsome and precious.

you do look fabulous! congrats! glad to see you back blogging!

Your babies looks so cute!

Absolutely precious. Thanks for taking the time to share your joy with us :)

You know you are rockin, mama. And I love Conner's long hair. Beautiful.