So, I thought that when Jamie and I decided I would stay home with Connor after he was born, I would have all this free time in my life. Ample amounts of time during my week to work on becoming the next Martha Stewart, Rachel Ray or Betty Crocker. (hahaha - life and thoughts before motherhood - I was so cute... and ignorant! )

As it turns out, I haven't been able to even think about the fact that I have a blog to write, the need for a shower, and to feed the dogs in almost a week! "What have I been doing?" you might ask. Well, seriously nothing that exciting, but just a LOT of little things. This little crunch we're going through now isn't even "Holiday time" related ... meaning things are only going to get more hectic! But I'm not complaining. Being able to stay at home with Connor is the best thing ever - I think I just need a little refresher in time management (but that will never happen!) 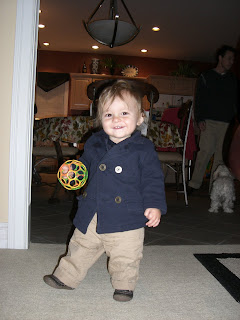 Most people agree that the more time you perceive yourself to have, the more time you kind-of waste not getting anything done! For instance, Connor has been sleeping in later in the morning! Alas! Sleeping until almost 10 am! He definitely is his mother's son! BUT, not getting up until then takes at least 2 hours of morning time away from our day - plus we can't make it to the gym in time for the play area to still be open for Connor. This is just one of the reasons we have been on what feels like a hamster wheel - running in place but not getting much done other than the occasional trip to the water bowl and lots of pooping (Connor that is!).

We've also started going to the Level 3 Gymboree class (compliments of Jamie's mom for Connor's birthday) which is at 10am on Monday morning. Jamie and I toured Chance School on Friday so we apply for 2-year-old preschool for Connor next year. My car was in the shop getting a bunch o' crap done so I had a rental (of my exact same Land Rover, which was nice) that I constantly realized things I needed were not in. ie: tissues, napkins, pens, garage door opener, cell phone car charger, radar detector ... etc... sucks. We also went to Indy with my mom to visit Lisa at Butler and go to the outlet malls on the way back. (side note: hit up J.Crew outlet - sucked, Ralph Lauren - ok, Gap - good, and Banana Republic -ok) Jamie was been wicked busy at work, which is a good thing in this economy, but not so good for his stress and helpfulness level at home ... but good.

Next week is another busy week, ending with being in a wedding on Saturday! Can't wait! I'll try to post more than once!! ;)
Posted by Lindsey Brodsky at 10:47 AM

He is too adorable in that jacket!!