Mondays aren't usually my favorite, but ever since Connor started preschool on Mondays and Tuesdays, I can get so much done!!  So much to do tomorrow!

Little Charlotte has a grooming appointment and has to be dropped off first thing in the morning and then I have to take my car in for a maintenance appointment and get a rental... hopefully a good one! And, then to my OB's office!

Tomorrow will be especially great because we are having our first ultrasound!  Yea!  We were a little disappointed last week when we didn't have an ultrasound at our first OB appointment, but since the doc says my uterous is a bit tilted,  she recommended one for tomorrow.  It's not a big deal, I think she mostly just realized I really wanted an early ultrasound and to hear the heartbeat, so that was the excuse.  ;)

With Connor, I had an ultrasound at about 7 weeks due to some spotting, so I guess I wasn't really sure what was protocol.  N E Way.... I'll have pics to post tomorrow! 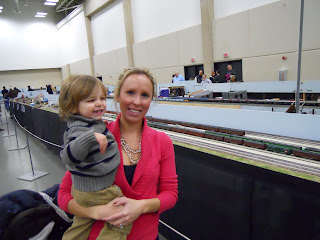 We are tired from hitting up the Great Train Expo at the Kentucky International Convention Center in downtown Louisville today.  There wasn't a whole lot to look at that Jamie and I were interested in, but Connor had a great time checking out all the trains!  He is really into trains right now... mostly because we got him the Thomas Wooden Train table for his second birthday which he is now obsessed with!   Luckily, we were able to get out of there only purchasing a little Thomas bathtub squirt toy and nothing more!


I've also got a huge to-do list for this week including: putting Christmas stuff away (errr), organizing maternity clothes so I know what I have, and packing for our New York trip next week!  Better get to bed!
Posted by Lindsey Brodsky at 11:17 PM