Oh yes, this is my first time blogging. Kind of unbelievable that I made it all the way through nine months of pregnancy and Connor's first nine months of life before I had time to do this. It feels like when you used to write in a journal when you were little, but way cooler with pictures and spell-check ... and you actually don't mind if others read it.

We just returned from Myrtle Beach, our first "beach" vacation with Connor. This was the most time Jamie has spent with Connor on a 24-7 basis since he was born and I think he really enjoyed it (especially seeing as how Connor now takes 2 consistent naps AND sleeps at 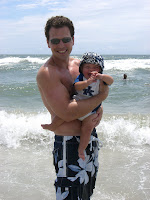 least 10 hours at night - there is a lot more to like about that schedule than his schedule at 3 days old!). Anyway, Connor LOVED the sand and the ocean which was such a relief ... we should have known with my love of the sun and pool, and Jamie's love for the ocean and sand, there really wasn't going to be an issue.
We made our presence known every morning on the beach as we came trudging along with a jogging stroller, pack-n-play, beach bag, boogie board, cooler, beach chair, diapers, swimmer diapers, 3 towels, sun screen, two hats for Connor (2 because he will definitely throw the first one in the water), and a truck load of toys.... ok, I'm exhausted just from writing all that, but once we were on the beach, it was amazing (after double-sunscreening Connor, lotioning ourselves, setting up the pack-n-play, laying out the towels, and making sure Connor doesn't get too sandy because, of course, it's alraedy time for his first nap!!!) It did help that our condo was on the first floor right off the beach, but when you're carrying that much crap, even 100 feet seems like forever!!!

It's good to be back and Connor is SO much happier in his sweet, cozy nursery here than in the crappy metal crib in the hotel.

It's Connor's bedtime (ok, an hour past) so I'm going to go help with that. Meantime, here are a few of the BEST pics from the beach. 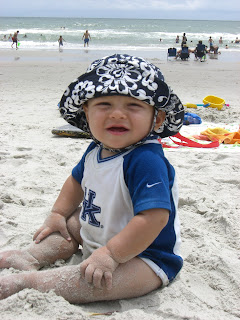 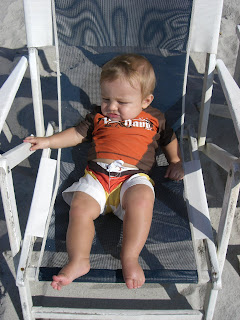 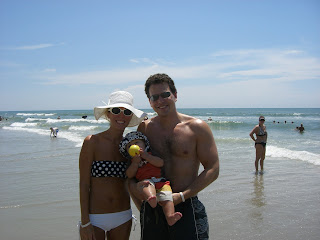 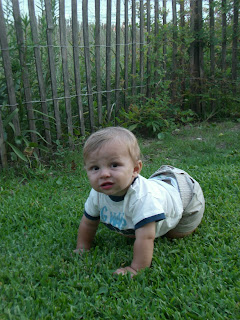 Posted by Lindsey Brodsky at 9:44 PM