Jamie headed off to Chicago at a sunny 5 am this morning for work, so Connor and I are home alone for a few days. I'm actually thrilled with all the extra time from not having to fix a dinner or cleaning up after an extra person. This is definitely allowing me some additional time to get our yard sale crap ready - plus I usually end up staying up way later when he's out of town, so naturally I get more done! I feel I should point out that the last time Jamie went out of town on business and left Connor and I here there was a rare earthquake in the area - so all in the Louisville area, beware. I'm actually one of the few dip-shits that slept through the entire thing and didn't even know about it until I tuned in to channel 11 for Regis and Kelly the next morning only to find special coverage of the earthquake (which was basically that 2 bricks fell off an ancient building downtown - it took approximately 6 hours to fully report on this damage - thank God something more substantial like ACTUAL damage didn't occur or they would still to this day be interrupting regularly scheduled programming). It was probably best that I didn't wake up since I was home alone and who knows the havoc I would have caused trying to get upstairs to Connor etc... etc... BUT, when I realized that Jamie had been up for a couple of hours and still did not even CALL to see if we were ok, I was steamed! How could he not call and see if his wife and precious baby boy were safe and sound?!? For all he knew, we could have been struck by the 2 bricks that fell off the building downtown!!! haha.... in his defense, he is from Southern California and survived the last "big one" as they say - so what we had was nothing to him. But still ....

Last night was our anniversary and we went to Rivue on top of the Galt House in down town Louisville. Apparently, this restaurant was voted the most romantic in Louisville and we were nothing but impressed. This is a picture of us just after the sun set. 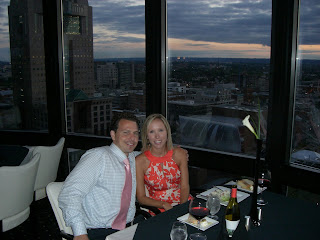 A few things to mention before I log off and get to work (blah)...

1.) I have not been to the gym in over a week AND I skipped out on my ballet class tonight. Have I just lost the motivation because swimsuit season is over? Or, more likely, have I just lost motivation like I always do? This time 2 years ago I lost all motivation because I knew I was going to be pregnant soon and what was the point of working out and watching what I ate? A few extra pounds is good for the baby, right? Right. If I do not go to the gym in the morning (and the chances of me admitting it publicly if I don't is slim) then I am sentencing myself to no wine for at least a week to teach myself a lesson. And as I type this, sipping on a tall pour of merlot, I already know that will never happen.

2. I'm mad because gas prices went up around our house today and my car says I only have about 50 miles until empty. I ALWAYS get screwed by having to get gas at the wrong time. AND, because we've been going to Whole Foods more, I don't even have a 10 cent off credit from Kroger Gas yet - dang .... I love my SUV, but I probably should have had Jamie leave the Hybrid for me while he was away.

3. Sarah Palin is not running for president. Stop talking about her like she is Britney Spears on last year's VMA's. The VP doesn't actually DO anything. Get over it.

I leave you with one of the more recent "cutest pictures ever" of Connor. 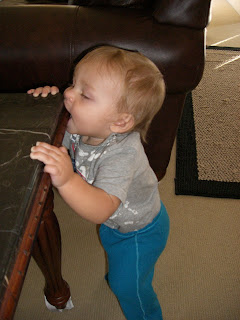 (Oh yes, he is chewing on our coffee table)
Posted by Lindsey Brodsky at 11:09 PM