First - CONGRATS to Rachael who brought little baby Walker into the world on Friday. Welcome to the Wild World of Parenthood!

So, we made it through the weekend all by ourselves at Nolin lake. It may not seem like much of an accomplishment, but when you consider all the things that could go wrong, plus add Connor into the equation, it is a big deal to make it through a weekend to the lake without even a minor catastrophe of some sort. I always worry about Connor getting sick when we're down there because we are literally in the middle of nowhere and the closest hospital is in Lietchfield (not exactly on the America's Top 100 hospital list). This also occurred to me last June when Jamie, my dad, and I went to the lake and I was 6 months prego. I wasn't willing to risk going to the lake any later in the summer than that because I did NOT want to go into labor in the middle of nowhere - and considering how fast I had Connor, it was a good thing I didn't go into labor down there because we wouldn't have made it back to the highway by the time I was 10cm, and I'm pretty sure there was no place to stop and get a quick tide-you-over epidural on the way home. 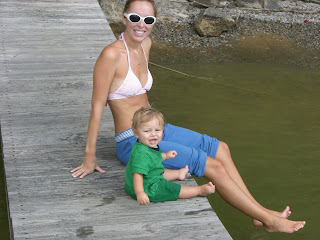 Anyway - it was nice to get away for a couple of days without the craziness of being at home with the dishes, laundry and dogs. Jamie and I discovered that we are absolutely horrible at starting a bon fire (it took 7 of the 8 fire-starter sticks that we brought - the box says use only 1 per fire - what do they know) but in our defense it did rain all day and night before we tried starting the fire, so I'm sure that played a factor!

Back on the home front, tomorrow is mine and Jamie's second anniversary, so we'll be going to a nice dinner tomorrow sans Connor ( thank to my parents) and then Jamie is off to Chi-town on business early Wednesday morning until Friday, so Connor and I will be free to party like rockstar with the house all to ourselves :) Yeah right. In reality, I'll be getting things ready for the neighborhood yardsale that we are participating in on Saturday (I'm selling TONS of nice clothes and coats that I'm just not going to wear any more - it's disgusting how much clothing I have - this will be a nice cleansing experience I hope!).

Max (Jamie's dog/ baby) is still in Columbus, OH recovering from radiation treatments for his throat cancer and we don't expect him home for at least another week. I'm looking forward to Max coming home for Jamie's sake so he won't be so stressed out about him all the time. They expect him to live for about a year with the treatment he received, so we want to get him home and start enjoying the time that we have left with him.

Until next time...
Posted by Lindsey Brodsky at 1:32 PM

Welcome back! Missed your posts! With you and Rach on hiatus, I was getting a little bored ;)

LOL, my sister-in-law is due in October, and she shares your same feeling of the medical care offered in Leitchfield so Labor Day was her last weekend at the lake with us :)